Redefining Home: Squatty Potties, Split Pants, and Other Things that Divide My World

My first attempt at speaking Chinese resulted in my telling a street vendor that I wanted to buy a daughter instead of milk. It was at that point that any semblance of self-respect was swept into the well-filled gutters of my new culture. Redefining Home follows our struggle as comfortable Americans moving into the chaotic streets of urban China. From the early morning cadence of funeral drums to being accosted by an 80-year-old man armed with a toothless grin, China has become home in many ways. As outsiders, we get to take in culture with the naivety of a child while trying to avoid the cynicism of a middle-aged bowler.

After several years, we returned to the States for a brief time only to discover that it no longer felt like home. Having conversations about intestinal parasites or my fascination with American gas stations was not a great way to fit back into the lives of our friends. We quickly realized that we had changed…as had the people around us. Flying across the ocean to return home to China reminded us that it’s the space in between the two cultures that defines our family. 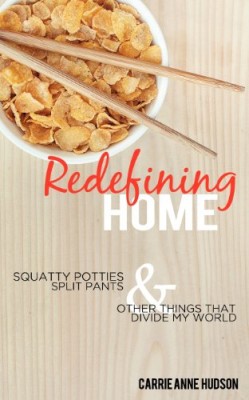