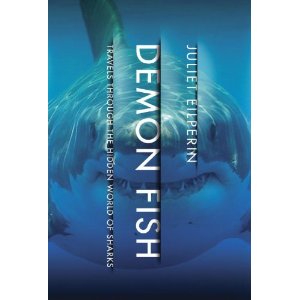 This book is an interesting account of sharks and how they interact with humans. I knew very little about sharks before reading this book, but the author does a great job of educating the average reader quickly. If you have any interest in sharks at all, you will enjoy this book. I don’t know if any dedicated Shark Week viewer will learn anything new, but it serves as a good introduction.

Some things I learned about sharks:

I learned what shark calling is, and which cultures still practice it. Really interesting read, one of the best chapters in the book.

I learned about Shark Fin Soup and why people really order it.

I learned about the shark fin auctions and the commodifying of sharks.

I learned about shark hunters, poachers, and owners and why they are hurting the shark population.

I learned that the shark population is decreasing rapidly, and sharks often aren’t as fierce as they are made out to be.

I learned that shark fetuses will attack and eat each other in utero.

I learned why sharks swim around with their jaws wide and teeth bared.

This is a hard subject to write about because sharks are such visually fascinating creatures, and because of that I’m not sure that a book was the best medium for the material. While its above average material, the same information conveyed via a documentary could have been outstanding.

All in all, this is a solid book. The author fails to make her case that sharks are on the verge of extinction and we have to treat them as a protected species, but its a good read nonetheless. Recommended if you want to be a shark fanatic and just need a little introduction.