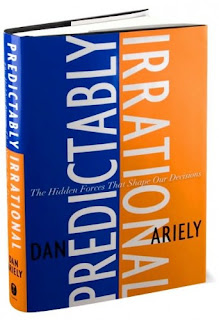 Dan Ariely, the James B. Duke Professor of Psychology and Behavioral Economics at Duke University, writes about “the hidden forces that shape our decisions” in Predictably Irrational. This book is not as diverse as some of the other behavioral economics books out there, but Ariely makes up for breadth with depth. Many of the subjects tackled are explored in detail.
Ariely writes about how he first became interested in the field of economics. You can skip the introduction to most economics book, but Ariely’s story is worth reading. Ariely received third degree burns on over 70% of his body as an eighteen year old. His experiences in the hospital, including three years of recovery and therapy, convinced him to study what shapes our decisions.

For the most part, the subjects Ariely tackles will keep your interest. Some of the broader financial subjects, like supply and demand, could have been tightened. The information is good but too much time is spent explaining the experiments used to prove it.

Ariely spends a lot of his time in the more traditional economics arena, albeit with examples that make the subject interesting to anyone. Unfortunately for the reader, the most fascinating subjects are also the shortest. There are at least two chapters that I will refer to in the future, one on the influence of arousal and the other on the context of our character.

As a Christian, these chapters interest me because they arrive at traditional Christian values through the study of behavior, absent of Scripture. In Chapter Six, Ariely tackles arousal. He conducts a unique study, the details of which are not important, but suffice it to say that Lifeway Research won’t be doing a similar one anytime soon. In fact, I think this chapter is important to read for pastors because it is one that Christians would not conduct, but the results support Biblical values.

Ariely concludes that we make bad decisions when we are controlled by lust. Not just bad decisions either . . . he shows how right and wrong become very gray when we are trapped in temptation. He offers two solutions, but focuses in on the second. He concludes that the best way to avoid bad decisions is to avoid putting ourselves in that situation. Some parents have decided that once they teach their kids to say “no” that their job is done. This book easily disproves that theory . . . it is often the parents job to say “no” so their children will be protected from uncontrollable situations.

Another great chapter covered the influence of the Ten Commandments on cheating. Long story short, reflecting on any part of the Ten Commandments was enough to stop cheating. Ariely goes on to test the same with different honor codes and has similar results. The results seemed to have surprised the experimenters, and I think there is more to reflect on for Christians here.

I debated whether to review this fully because it touches on some controversial subjects. However, I think books like this are important for Christians to read. The more we learn about human behavior, the more the Bible is confirmed. This book is recommended for anyone who is interested in why we behave the way we do.