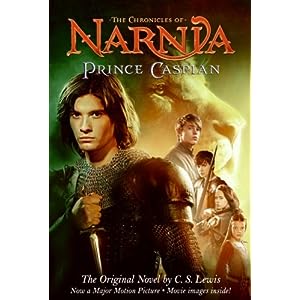 This is the second book in the Narnia series, and it is almost as good as the first. There are three things I really liked about it.

The first is how Lucy is able to discern Aslan before the others do and leads them until he becomes visible. This a great way to explain both a preacher’s role in guiding others to Christ and a way to highlight the things that small children are aware of that we often miss. It is a good reminder, and a great part of the story.

The second aspect that I liked about this book is the timeframe of it. 1,000 or so years have passed in Narnia time since the first book. As we look at the world through the Pevensies eyes, much has changed for the worse. Just as the children try to right the wrongs they see and turn back the clock, Christians must do the same in our realm and pray Christ restores order to the world.

The third aspect I really enjoyed about this book is harder to describe . . . but I really like how Lewis gets away with writing this book exactly how he wants to. Lewis uses white magic, black magic, dryads, dwarves, wood goddesses, and even introduces Bromios and his maenads as part of Aslan’s army in the eleventh chapter. I love that Lewis was able write this as he wanted, to speak with clarity and courage and put things on paper that would never fly if it were written today. Its refreshing to read Christian fiction that defies the boundaries of religiosity and really dives into true Christianity. Its hard to imagine a modern Christian writer getting way with half as much as Lewis does . . . we don’t even let the secular authors like J.K. Rowling off the hook these days.

For the young, this is an exciting adventure tale that is told masterfully. For the mature, it is a fascinating and refreshing blend of theology and story. Definitely worth reading.