The Violent Bear It Away 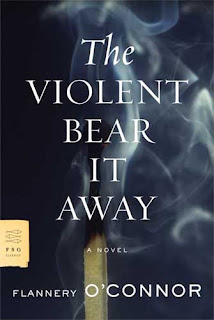 “In the darkest, most private part of his soul, hanging upsidedown like a sleeping bat, was the certain, undeniable knowledge that he was not hungry for the bread of life.”

Haunting. Flannery O’Connor, though she wrote only two novels in addition to her many short stories, had a gift for writing haunting works. The Violent Bear It Away is perhaps the best example of this. It would be hard to describe what this book is really about at its core – religious suffocation, the failure of reason, and the weakness of man are all major themes in this book. She is one of the very best Christian writers that we have been blessed with this century, and her unique voice should be heard by many more.

The battle of reason that plays out in the book is reminiscent of the “new atheism” in the modern era. In fact, this book so eerily describes modern atheism that could be called prophetic. The struggle between Rayber’s character and his own humanity is deftly handled, and recognizable even for committed Christians who struggle against truth. To be sure, the inner battles of the people in this book are guaranteed to make the reader very uncomfortable. Few works of fiction go beyond mere entertainment, and fewer still can make an impression on one’s soul like this book does.

The prescient descriptions of the character’s inner thoughts ring true in a way that is missing from most other works. If you are looking for a book that will affect you, that will haunt you, and that you will want to read again even though it will make you uncomfortable, then read The Violent Bear It Away. Highly Recommended.