The Voyage of the “Dawn Treader” – Review 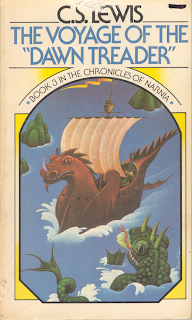 Book 3 in the Chronicles of Narnia takes us to islands of stars, dragons, wizards, and more. The story in this book is driven mainly by the voyage itself, with the children visiting seven different islands in their search for Aslan’s country.

I have heard people say this is their favorite book in the series, and others say it is their least favorite. Personally, I loved the way that story is told. It feels like a true adventure novel and Lewis intersperses the voyage with plenty of great theology.

Rather than write a long review, there is one passage in particular that I keep going back to. Tim Keller mentions the same passage in his latest book King’s Cross: The Story of the World in the Life of Jesus. Eustace Scrubb has been transformed into a dragon through his greed, and after despairing that there is nothing he can do about it, Aslan comes on the scene.

“So I started scratching myself and my scales began coming off all over the place. And then I scratched a little deeper and, instead of just scales coming off here and there, my whole skin started peeling off beautifully, like it does after an illness, or as if I was a banana. In a minute or two I just stepped out of it. I could see it lying there beside me, looking rather nasty. It was a most lovely feeling. So I started to go down into the well for my bathe.

But just as I was going to put my foot into the water I looked down and saw that it was all hard and rough and wrinkled and scaly just as it had been before. Oh, that’s all right, said I, it only means I had another smaller suit on underneath the first one, and I’ll have to get out of it too. So I scratched and tore again and this under skin peeled off beautifully and out I stepped and left it lying beside the other one and went down to the well for my bathe.

Well, exactly the same thing happened again. And I thought to myself, oh dear, how ever many skins have I got to take off? For I was longing to bathe my leg. So I scratched away for the third time and got off a third skin, just like the two others, and stepped out of it. But as soon as I looked at myself in the water I knew it had been no good.

Then the lion said – I don’t know if it spoke – you will have to let me undress you. I was afraid of his claws, I can tell you, but I was pretty nearly desperate now. So I just lay flat down on my back to let him do it.

The very first tear he made was so deep that I thought it had gone right into my heart. And when he began pulling the skin off, it hurt worse than anything I’ve ever felt. The only thing that made me able to bear it was just the pleasure of feeling the stuff peel off . . .

Well, he peeled the beastly stuff right off – just as I thought I’d done it myself the other three times, only they hadn’t hurt – and there it was lying on the grass: only ever so much thicker, and darker, and more knobbly looking than the others had been. And there was I as smooth and soft as a peeled switch and smaller than I had been.”

Powerful. Excellent book for all ages, just like the rest of the Chronicles of Narnia.